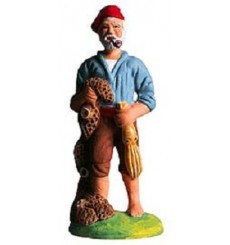 A fisherman with a net over his shoulder and an octopus in his left hand.

A fisherman by trade is called ‘Lou Pescadou’; an amateur fisherman is known as ‘Lou Pescaire’.
Man who earns his living from fishing. An important character in the crib; sea and freshwater fish, in fact, forming one of the staple elements in the Provençal’s diet, as well as item of trade outside the region.
Marcel Carbonel presents two types of fishermen: the freshwater fisherman – the ‘angler’ and the ‘seated angler’, and the saltwater, or sea fisherman – the fisherman with net.
The Angler, ‘lou pescaire’, is standing showing a fine fish which he holds proudly in his hands. He wears woollen gaiters over his clogs.
The Fisherman with a Net has thrown his net over his shoulder and carries a basket of fish under his arm. He has rolled up the sleeves of his seaman’s jersey, tucked his trousers up to his knees and is barefooted.
All three have the ‘taïolo’ – a long, wide, woollen sash which is always red for fishermen wound around their waists, tightly holding the small of the back. They wear red cotton caps on their heads.
The Seated Angler – placed usually by a little bridge at the edge of a stream – has rolled his trousers up to his knees. Hard at work, he holds a rod in one hand and a fish in the other wich his willow basket ready beside him for the catch.