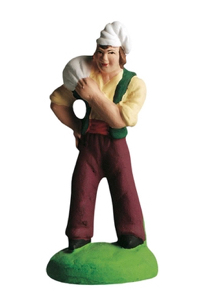 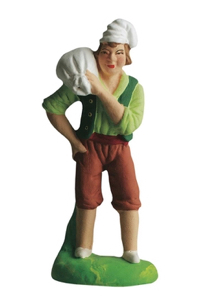 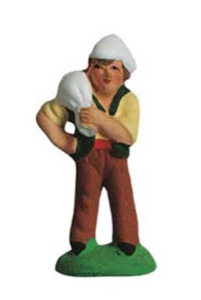 The Miller with his sack of flour slung over his shoulder, awaits his turn to present Mary with the gift of his trade. Available in #1, #2, #3

The miller is one of the most important men in the village. He grinds all the flour for the bread. His livelihood depends on the whims of the wind to produce the power that turns his mill. He is continually in a state of confusion.

For days his mill has been silent, as there has been no wind to turn the sails. Everybody has brought grain to be ground and some of the housewives are already feeling the pinch as they need the flour to make bread and cakes to help celebrate the new year. The bakers are in despair due to the demand of  on the travelers who are passing through the village on their way to Bethlehem for the Kings census. The miller is beside himself and feels that only help from Heaven would be of any avail.

In the middle of the night he is awaken by a loud noise. At first he thought it was his wife snoring, but he soon discovers that the mill is turning rapidly and all the grain has been ground into flour. He was too busy at the time to figure out what had happened.

Later his neighbor told him of the Devine Birth. Then he knew it was the Lord who set the windmill in motion.

The miracle gave him plenty of flour to load up his donkey and head off to offer sacks of flour as his gift to the Holly Family.