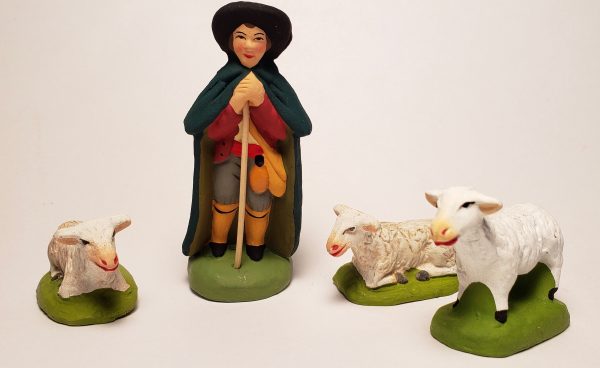 The Santon Legend of the Three Shepherds

GOD had resolved that the greatest event in the world should be made known first to the very humblest and poorest. Agnel, the shepherd in charge of the flocks, was on duty that night when a bright star appeared. Murmurs vibrated through the still air. Singing emanated from the illuminated space above. He woke Cabrier, the blind shepherd, and Pastroule, the deaf mute. Cabrier and Pastroule stood in the doorway, dumfounded. The blindman could see the new star and nothing else. The deaf mute could hear the angel and nothing else. Cabrier, described the angel as it came toward them from the star. Pastroule, repeated the angel’s words in song. The miracle ceased. Cabrier could no longer see. Pastroule could no longer hear. After this brief glimpse of Paradise, God had turned them once again into the poor cripples of the earth. Agnel sounded his horn to announce the great news of Christ’s birth to mankind. They were the first to reach the creche with their humble gifts. Agnel brought a jug of ewe’s milk. Pastroule presented the Christ Child with a newborn lamb which he had been holding about his neck. Kneeling to present his gift of cheese, Cabrier, the cheese maker cried silently. “You poor man” said Agnel to him, “you can’t see Jesus!”
“I’m crying because I can see him.” answered Cabrier. “I can hear his prattle,” exclaimed Pastroule, the deaf mute….both cured forever more.