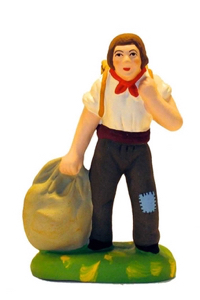 Marseille is a large city that boarders the sea. There are many ships importing and exporting goods. A dock handler is necessary for the task.  Story below. Available in #2 only.

The portefaix appeared at the end of the XIVth century. These porters were used to load and unload ships by hand with  no mechanical help. This work employed a lot of workers. At the beginning of the XIXth century their corporation had the monopoly of the handling of the Port of Marseille. At the end of the XIXth century, they were supplanted by the Company of Docks, equipped with machines for lifting. They were more organized with cold storage  plants and silos. The porter is the ancestor of our modern dockers.