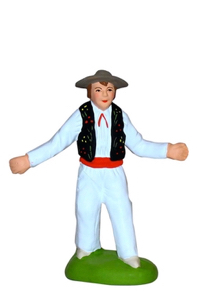 The Story of the Tambourinaire

The Origin of the Farandole

Galoubet, the musician, was beating with one hand on his high drum, and playing the fife with the other. He was a Tambourinaire from Provence. But had he come from Provence to Judea? Or had the crèche of Judea, in the 19th century, move to Provence, through space and time? One does not really know. The people of Provence have made so many legends with Christmas, that Christmas itself sounds like a Provençale story…

On the square of Bethlehem-in-Provence, Galoubet had played all evening for the dancers who were bumping into each other in the dark. At midnight, curfew time, everyone should have returned to their home and the streets should be empty. But no one seemed to be thinking of going to bed, Galoubet least of all. He felt so happy that he forgot about the curfew, and did not stop beating his drum or blowing his fife.

Calamity! There was a patrol of soldiers reaching the square. Right away Galoubet stopped playing. But the fife did not stop its song! The drum did not stop its beat. It seemed that they wanted to play by themselves. Galoubet astonished, remained mouth opened, his hand up in the air.

The patrol came nearer. The dancers had not seen it! Gaboulet was going to be accused of making people dance after curfew time. He would surely go to jail!

But a bewildering thing happened. The sergeant made a friendly gesture to the Tambourinaire, and he was holding a lantern. One could see he was smiling. Was everything allowed tonight?

Galoubet put the fife to his mouth and blew harder. He hit harder the skin of his drum. He was filled with music. He quickened his step and the ball whirls, swirled until heads spun. It even caused the hands of the clock to spin!

Dawn was near. Galoubet still played and the ball went on.

Galoubet was exhausted. But was it only fatigue that made the drum seem heavier? Why did the straps suddenly weigh so much on his shoulder? The straps, they pulled him forward. Galoubet felt his drum drew him. He obeyed. Walking on, he left the square, wandered through a winding alley followed by the frenzied dancers.

People appeared in windows, astonished to see this dance running through the streets. Many wanted to participate in the merry making. They came down to join hands with the chain of dancers. In a whirl of fun, the dancers, growing all the time in numbers, crossed the town led by Galoubet.

Even the flames of the torches seemed to dance. They projected on the walls of the narrow  streets. these strange shadows were dancing too.

Sometimes poor Galoubet, tired and worn out, stopped playing. The music did not need him to go on. The music is now a new tune, a marvelous melody. The”Farandole” has just been invented in honor of little Jesus. The farandole is a dance, danced running. It is a ball taking place in the streets gathering crowds of dancing people. He is lead by the magic drum. But to where? But that’s it! God knows where…to the creche.

Upon seeing Jesus, all the dancers stopped. Slowly they dropped down on their knees and all, even the most heathen, worshipped the golden baby. Galoubet offers Jesus the most beautiful music he knows. He goes on playing the Farandole.                  Author Unknown