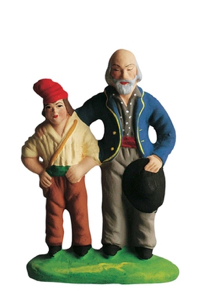 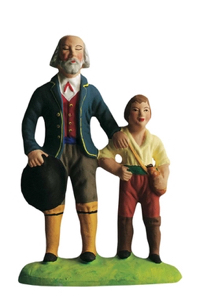 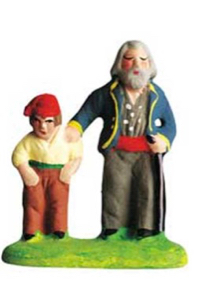 A favorite figure to the crib. Please read the santon story of the “Blind Man and His Son” below. Available in #1, #2, #3.

The Blind Man & His Son

A popular figure around Provence, the blind man, always accompanied by his dog, travels to the manger with his young son to thank the blessed mother for consoling the sick and afflicted.

Although blind, he never questions his affliction. He feels that the Light of the World is within him. Even though he can not see he feels everything must be beautiful because God made it so. He prays, not for sight in the world, but for vision when he reaches heaven.  He believes in Paradise and Angels and he wants to see them. Being an old man he knows that time is not far away.

He stands in the stable, with his strong faith and inner vision, leaning on his young son’s shoulder. As he imagines the scene before him, his sight is restored! In his excitement of all he sees before him, he recognizes an older son “Chicoulet“, who had been stolen from him by the “Brigand” many years before.

There before his very eyes is his own long lost son and the Son of God!